Your friend asked on July Fourth if she could crash on your couch while she looked for an apartment. You didn’t mind her doing it and you didn’t ask her to pay anything. But now it’s August and she still hasn’t found a place. You don’t mind letting her stay for free, but your roommate is starting to get cranky and there’s nowhere else for her to go. You feel like if she chipped in towards the rent, that might help smooth things over, but when is long enough to start asking for a contribution? And how much money should you ask for?

The standards of courtesy and hospitality vary wildly from subculture to subculture, locale to locale, person to person. What you offer your friends is your own business, but in this article we use survey data to explore what baseline you ought to expect as a guest or host. We collected survey data over the internet from users of free bill-sharing tool Splitwise.com (of which I am a co-founder) with the assumption that the guest would be crashing on a futon, couch, or in common space of some kind (without much privacy – for guests using an unoccupied bedroom, another article in this series is forthcoming).

How long is too long?

Most people feel that letting someone crash on a couch for a few nights lies well within the boundaries of good old fashioned hospitality. After that, things get less clear. Our survey respondents were split on the question of how long a guest should stay before offering to pay. However, a strong majority of respondents (75 percent) felt that after a week, some form of payment should be offered. So if you’re staying longer than a week, you should offer to pony up before your friends ask you. 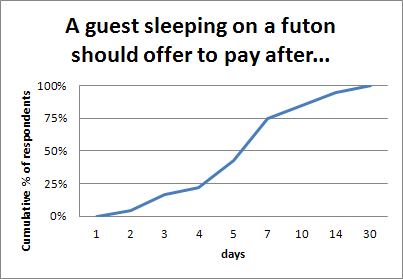 After five nights, 45 percent would already be expecting some form of payment, so to be safe, you may want to offer sooner if you are the guest. A substantial minority of respondents (22 percent) even say you should offer to pay after 3 to 4 days.

In practical terms, this means a conscientious person should probably give a thank you card for one night, a small gift for three or four nights (to please those 22 percent), and offer some cash for more than five nights. Again, among very close friends or very generous people there might be different standards, but I’d say this is a good guide to dealing with strangers, roommates, and acquaintances.

There was no consensus among our respondents for how much to charge guests. However, using a statistical analysis of our responses, we can give a good general guideline: guests who stay longer than a week should pay a two-thirds share of the rent, for each night that they stay. We’ve created a free Guest Calculator to do the math for you.

Here’s an example. Your apartment costs $960 in rent per month, and you split that evenly with one roommate. Dividing by 30 days in a month, the usual rent comes out to $32 a night, or $16 each. So going by the two-thirds rule, if you have one guest over who stays longer than a week, that guest should pay $8 per night while you and your roommate should each pay only $12 a night while the guest is over, so that in the end you pay two-thirds of what they do.

How did we come to this conclusion? One question we asked in the survey was, “What would be the fair nightly price to charge a guest sleeping on a couch, if you had to make up a price?” The answers follow a line that has a slope of about two-thirds (with some outlier responses). This simple bit of statistics shows you the intuitive guest price as a function of the hosts’ rent. 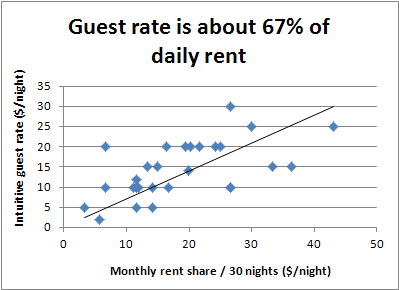 For you statistics-lovers out there, the correlation is decent but not earth-shattering (r=+0.6, feel free to email me with methodological questions). This reflects the wide variety of opinions on the matter, and this result is just a guideline.

Statistics aside, this conclusion seems pretty fair to me – guests who stay longer than a week are basically temporary roommates, but since they don’t have their own bedrooms, they pay 33 percent less than someone with a bedroom. I can accept that the privacy and comfort of a bedroom is only about one-third of the enjoyment I get out of sleeping in a given apartment. (The other two-thirds comes from having something soft to sleep on, a roof over my head, not worrying about getting mugged, etc.)

Another way we asked this question was by inviting respondents to choose a “fair method” from a list of ideas. No one method got a majority of responses, but the most popular option was to ask the guest to chip in for the monthly bills (but not rent) for the nights that they stayed. 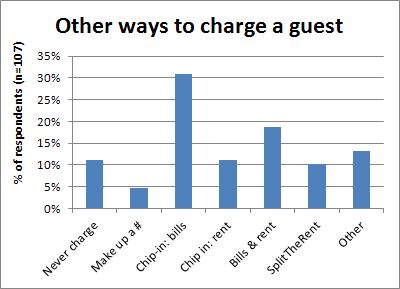 This approach has the merit of feeling less arbitrary than my “two-thirds” approach. However, if you only ask guests to pitch in on bills like electric and heat, as just over 30 percent of the respondents chose, it will come out to much less money than the two-thirds method. In my own apartment, the guest’s share of heat and electric would be about $2 a night, or $60 a month, which just feels too low to me, unless this is a close friend or family member without a job.

My final recommendation: In cases of doubt, use the “two-thirds-of-a-person” method (or have us calculate it for you). If your guests can’t afford that, or you don’t want to ask your friends for that much, offer to split just your bills with them for the duration of their stay. Or, if you are a guest, consider offering a roughly equivalent gift.