5 months ago, we released our initial mobile apps for iPhone and Android. We’ve had great success with the apps and it’s long past time we updated them! I joined the team a month ago and started working on a new app for the iPhone – which is now waiting on approval from Apple and should be available some time next week. 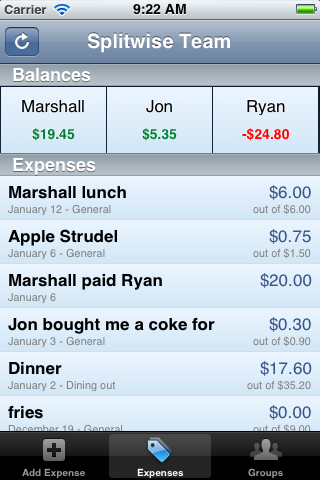 This version is not a huge departure from the existing app, but it is (a lot) more stable and stores data locally. You can’t (yet) add expenses while you don’t have an internet connection, but you can view everything while offline. This has the nice bonus of speeding up the app significantly. You’ll also find we’ve added a real interface for adding payments instead of just doing it in quick-add.

We have a bunch of new features planned, but we wanted to get a sexier version of the current feature set out in the app store before we start work on major changes. I’ve already started working through our next iPhone update, so you should see another new version in the app store soon after this one.

Android users! We haven’t forgotten you! We’ve got one more revision of the iPhone app in the pipeline, but we will be updating the Android app in the next couple months as well.