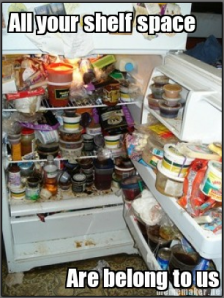 Dear Splitwise returns this week to settle the issue of shelf space in a fridge that is owned by a roommate. This is common in places like Europe, where household appliances being included with a rental isn’t necessarily the norm.

I live with three other people in a four-bedroom share house. One of my housemates owns a 400L fridge. She uses between 40-60% of the fridge space, depending on how much food she has at the time. She also claims sole use of the largest and most convenient shelf (there are only three shelves, so no-one else can have their own shelf) and says that this is fair because it is her fridge. If we wanted to have unfettered fridge access, then we should supply our own fridge.

The problem with this – aside from the logistical issues with placing multiple fridges in an average-sized, inner-suburban house – is that the kitchen of a shared house is shared space. We all rent that space. If a housemate wants to carve out a fridge empire or own other large ungainly objects that others can’t freely use, they should do so in their bedroom and leave the common areas to be used equally by all housemates.

What do you think?

Well that sounds like an uncomfortable situation. As much fun as filling your kitchen with fridges would be (think of all the food you could have!) it’s definitely not a viable situation if you want any other useful space. I agree with you, the fridge space needs to be split equally. If something is in the common space then it’s everyone’s to use equally. If she wants to be the shelf overlord of her fridge, then that “ice queen” should stick it in her room and let you guys split a new one for the kitchen.

If your roommate doesn’t agree with this (which is sounds like she doesn’t) then you have a couple different options. You can offer to buy another big ticket item in the house so that she feels things are fair. A TV or couch is close to the same type of large purchase as a fridge. If you don’t want (or can’t) go that route you could also offer to “rent” the fridge space from her.

Let’s do a little math for entertainment purposes. I’ll make the assumption that the fridge is 3 years old, it cost $1600USD and your lease is a year. Using simple math and depreciation, we can get an idea of what the fridge “rental” would be.

From year three to year four, the fair value of the fridge went from $747.24 to $587.10 (using our trusty furniture calculator, and making the assumption it’s still in good condition). Take the difference and divide it by 12, which is $13.35 a month. Divide that into 3 and each roommates share would be $4.45 a month.

I’d start the conversation out about how common space is common space, and it should be shared equally. If that doesn’t work then I’d go with one of the other two options I went over above. Getting a new TV out of the deal or paying $5 a month is totally worth having a fair share of fridge shelf space.