Splitwise for Android Version 4.0 is the polished, powerful app our Android community deserves. We’re excited to announce that it went live in Google Play earlier today, after months of development and testing.

With this update we focused on elevating the look and functionality of the app. Google’s material design paradigm helped us build transitions, navigation patterns, and animations that make Splitwise simpler and more delightful to use. We’re thrilled to have an app that exemplifies what’s awesome and unique about Android.

In addition to these major visual changes, we concentrated on improving Splitwise’s core interactions: adding bills and checking balances. We’ve organized the new design around tabs for both individual friends and active groups, with detailed balance information visible right on the dashboard. We’ve also spent some care improving the details of the all-important “add bill” form, and squashed numerous bugs.

“Hefty Otter”, as 4.0 is known internally, was a true team effort that engaged almost every person at Splitwise. It feels amazing to share it with everyone. We can’t wait for the feedback to start rolling in so we can keep on improving.

Read on for a detailed tour of the release.

Material design is Google’s visual language for apps and websites. It proved fertile ground for some of the major visual changes introduced in this release.

The button that launches “add bill” is now a large, circular button that floats in the lower right hand corner of most screens in the app. User testing revealed that this change made the button easier to find, in part because many Android apps use the FAB to launch their primary action; we’re building off the muscle memory established by a whole ecosystem.

The core app architecture is now comprised of 3 tabs: friends, groups, and recent activity. Liberating these views from the sidebar has made them much more accessible. Users can swipe to switch between tabs, so it’s easy to change contexts quickly.

Each group and friend screen now has a large header that’s rich with information. When scrolling down the expense list on these screens, the avatar and name of the friend / group will slide slightly left as the large header collapses. This subtle animation helps users stay oriented while moving between various relationships.

“Add bill” has always been a powerful form. Unfortunately, in previous versions of our Android app some important capabilities were obscured behind the keyboard. Splitwise 4.0 introduces a compact toolbar to the “add bill” form, so users can easily attach receipts and notes to bills, set bills to reoccur, and more. We also separated the currency symbol from the amount field and made it more clearly tappable, to make it obvious that users can add bills to Splitwise in any currency.

IOUs and “UOIs” are very common on Splitwise. We’ve tweaked the experience of adding a bill with a single friend to make it much easier to switch from “Paid by you and split equally” (the default for all new bills) to “I owe you the full amount” or “You owe me the full amount”. Speeding up core interactions by 2-3 taps is the stuff our dreams are made of.

Too often, we watched users add a bill from the “Home” screen and then go hunt for it in their group or friendship to ensure it got added correctly. No more! Version 4.0 displays a small, self-dismissing alert once a bill is added successfully, eliminating the need for double-checking. 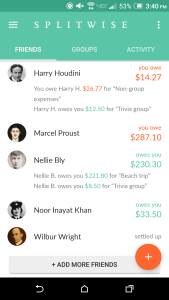 Version 4.0 introduces a tab for groups and a tab for friends. We use this new real estate to display balance break-downs for each group and friendship. Balance break-downs make it easy to understand at a glance where that +$10 balance with Sarah really comes from: You owe them $50 for bills in the group”Las Vegas 2016″, while they owe you $60 for bills in the group “Our apartment”. We’re striving to eliminate all uncertainty around the question “Why do I owe what I owe?”

We wanted the friend and group tabs to be full of information, but not cluttered. Towards this end, we implemented a feature that automatically hides groups and friends that have been all settled up for 30 days. To add hidden friends back to the view, scroll down to the bottom of the friends tab and tap “tap to show old settled friends”. Likewise for groups. This improvement ensures that the root views are showing only the freshest relationships, and makes them easier to scan.

It’s become increasingly popular for users to add bills in multiple currencies. Version 4.0 does a great job of honoring this. The balance break-downs mentioned above will display multi-currency balances, as will the friend and group headers. The beloved “group totals” feature now displays spending totals across all currencies used in the group.

Splitwise has made great strides over the past year in regards to internationalization. With the help of our amazing volunteer translators, we’ve made the app available in Dutch, German, French, Spanish, Italian, and Portuguese. We’ve also introduced smarter behavior for new bills in multi-currency groups; on both mobile platforms, new group bills should default to the last currency used in the group (overriding the user’s account level default currency). This makes it easier to switch currencies for a trip without having to configure any explicit group-wide setting.

Version 4.0 brings Splitwise Pro features to Android for the first time. Included in the feature set is “currency conversion” for groups. With one tap, Pro users can now convert all expenses in a group to their default currency based on the present day exchange rate. Another Pro feature introduced in this release is “Search”, which will work across all expenses and payments in an account. An empty search also works as an “All Expenses” tab, which we have de-emphasized in this release.

The beta group for this release was primarily comprised of Pro users. We’re so grateful for their support and passion for Splitwise. To update to Splitwise Pro, log into the web app and then navigate to “Account Settings“.

The whole Splitwise team is tremendously thankful to our whole user base: thank you for sending us your praise, gripes, feature ideas, bug reports, and random GIFs. Knowing that you use Splitwise to keep stress out of your most important relationships gets us up in the morning. If you have any feedback on “Hefty Otter” or any aspect of Splitwise, please reach out to us at support@splitwise.com. We read every email we get any try to respond within 48 hours.

Product Manager at Splitwise. View all posts by Zoe Chaves