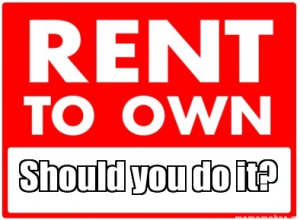 Owning a home – it’s one of those things that we’re told we should do from early on in life. Home ownership is considered a status symbol that separates the middle class from the poor class. Wikipedia even states that a core pillar of the the American dream is owning property.

This is why even when living in a location where it’s better to rent than buy, many people are insistent on owning a home. Since the housing market bottomed out and loans are difficult to obtain, finding an alternative way to sell or own a home has become a necessity. One option is a “lease to own” contract between a buyer and homeowner. The future buyer will rent the property for a period of time, then have the option to purchase the home at the end the lease.