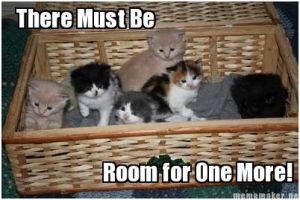 Splitwise asked for your best roommate horror story, and boy did people deliver! Our inbox filled with some insane situations, some so bad and horrific we couldn’t even print them. The stories ranged from tales of simple social awkwardness to straight up sociopathic. Thankfully we were able to live through those situations second-hand, and not have to actually experience any of it ourselves. The challenge to find the winner was difficult … but kind of fun.

We’ll save the winning roommate horror story for tomorrow, but here are the runners-up.

This woman proves that you in fact, can have too much of a good thing.

My worst roommate was my third one after moving to LA. We had to share a room, not just an apartment (and after that experience I knew never to share a room with anyone ever again. I’m pretty sure when I get married, my husband will have to sleep in another room as well).

What made her horrible wasn’t the drinking, partying, and coming home at 3 in the morning most days. For the most part, that didn’t bother me. It wasn’t reading with the light on in the middle of the night, because she stopped doing that after I did it to her a couple of times. It wasn’t that she didn’t want to clean the bathroom, ever.

It was the cats. She started with 1 cat, and that was fine because the cat didn’t like me (and I didn’t like her) so she stayed away. Then it became 2, one cat which was pregnant and she stopped cleaning the litter box regularly. Finally, it became 50. The pregnant cat had her litter and there were cats and cat crap everywhere. No matter where you turned, there was a cat, that liked to scratch you and everything else. Cats that especially liked to hang out under my bed. The day that I fell while in my bed because the cats scratched the wood so much it cracked was the day I knew I had to leave. Luckily, our lease was up 2 weeks later.

This is one situation I wouldn’t be able to live in for more than .005 seconds. I give Lindsey and her roommate credit for having super human patience with this guy.

I lived with 2 girls my senior year of college in Philadelphia¹, Sarah and Lindsey. Sarah moved out at the beginning of the summer to do City Year elsewhere, so it was Lindsey and myself looking for a 3rd roommate for the summer.

Like most college students we posted on FB asking if anyone might be looking for summer housing. We had two interested candidates: One was Jack who was a guy who’d previously harbored a crush on Lindsey, and the second was Craig who was a fabulous gay dancer whom we’d both gone to school with previously and was sparkles all around.

We decided to go with Craig: We made the terrible assumption that he’d be clean and wonderful and bring all sorts of fabulous into our lives.

We first noticed something was weird when some of our food would randomly start disappearing, we’re not talking a few crackers or chips here. We’re talking ENTIRE BAGS OF TORTILLA CHIPS. And we are also talking about how Lindsey made large ravioli for dinner one night and saved 3 of them in a bowl. She came back from work the next day to find that there were only 2 raviolis left. Really? Did he think we wouldn’t notice that?

We then started noticing he had a severe hygiene problem… he didn’t smell bad, but he didn’t really clean up after himself. Now he had his own room so we didn’t care about his messy room. What we DID care about was the fact the Craig never flushed the toilet. Ever. Think about that for a second. Every morning either Lindsey or I would walk into the bathroom to find a little “surprise” sitting in the toilet boil. Not only that, but there were always dark smears on the back of the toilet seat. I’m pretty sure Lindsey and I both avoided ever using our toilet until after that summer.

One day Lindsey comes into our room and asks “Hey, you didn’t use my towel did you?” To which I replied, “No…” Apparently, Craig thought that anything in that apartment was his fair and square and decided that instead of walking the 2 steps to his room for a towel, that he could just use hers and leave it wet on the floor! It happened to me a few weeks later. We both kept our towels in our room from that point on.

Last but not least, Craig was prone to perusing Craigslist for temporary male companions and would bring them over for a little romp in the sack. Complete strangers endangering both himself and Lindsey and me.

I can’t tell you how relieved we both were when we finally moved out and got our own apartments… as far away from Craig as possible. NEVER AGAIN. I will live alone until I’m married.

¹All names and locations have been changed for anonymity purposes.

These horror stories are a perfect example of why everyone should follow the golden rule (especially when it comes to flushing). Both of these situations caused these women to swear off roommates until marriage, and I can’t blame them! Hopefully these winners are now living alone, or have found someone to share space with that isn’t insane.

Tomorrow we’ll be printing the winner of our horrible roommate contest.