Today, Splitwise is launching a major refresh of our entire platform, including our mobile apps, homepage, and logo.

First and foremost, we’re releasing Splitwise for iOS Version 5.0, which is a full redesign of our flagship iPhone app. We’ve rebuilt all the most important screens in a modern new style. Improvements and features include:

Our goal for this redesign was to keep Splitwise easy and simple to use, while refreshing the interface to feel modern, clean, and polished. The Splitwise team felt (and some of you told us) that the iPhone app was starting to show its age. These changes represent a huge step forward.

Simultaneously, we are releasing an updated version of our Android app. Splitwise for Android 4.6 is a significant evolution that includes support for the updated branding and all the same new features as the iOS update: group cover photos, new default user avatars, faster group creation flows, and support for Splitwise Pro. We’ve also redesigned our homepage and web app to incorporate the new logo, icons, and visual identity. 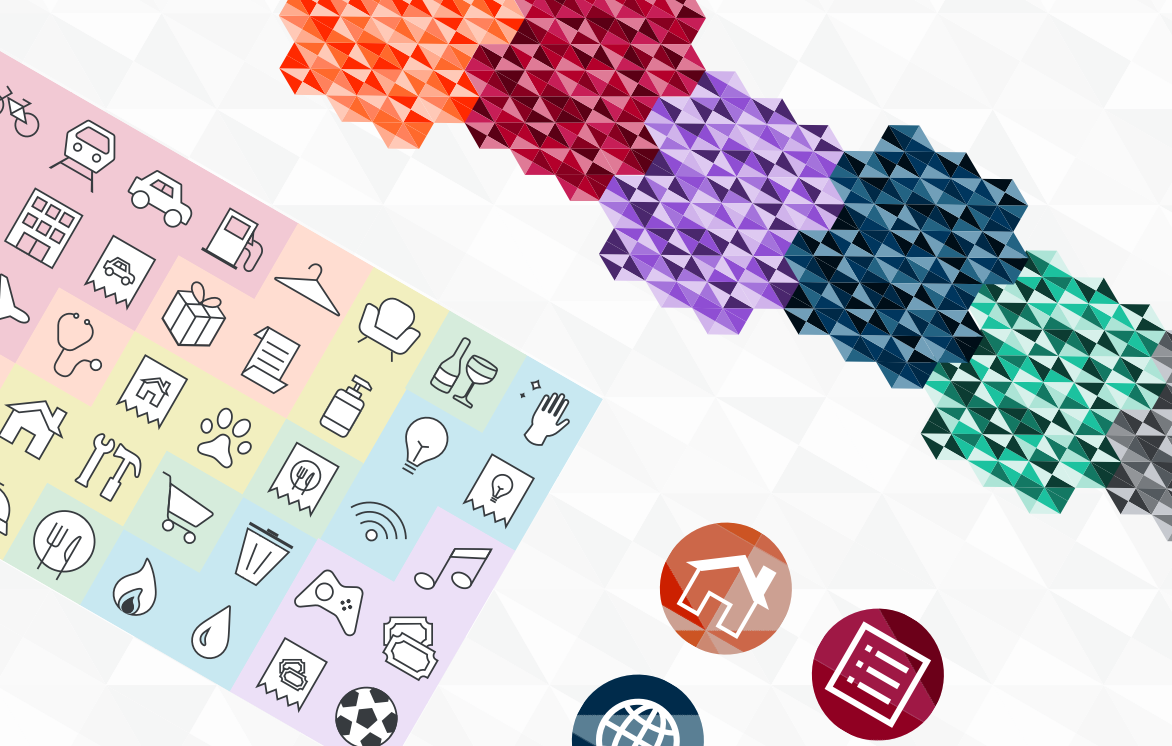 We’ve expanded the Splitwise color palette to incorporate more saturated jewel tones, which mirror the jewel-like facets we’ve added to our visual language. We were drawn to this metaphor because gemstones – like our relationships – are beautiful and precious. This visual identity was developed in collaboration with our friends at Motel, a design agency also headquartered in Providence, RI. We have also adopted a new family of elephant mascots to give you a tour of this multifaceted world.

New, varied default avatars add a punch of color, make it easier to find someone specific on the Friends tab, and help you visually distinguish between people with similar usernames.

We hope you’ll love these changes as much as we do!

We’re excited to introduce global support for Splitwise Pro, which is the first major version of our premium service and unlocks advanced features which make sharing expenses even easier. Splitwise Pro includes:

We’re excited about the Pro features. Itemized receipt scanning in particular has become a favorite among the Splitwise team and is great for large grocery receipts or splitting a complex dinner bill item-by-item.

These are the early days of Splitwise Pro, and we’re offering a 30-day free trial so you can check it out and give us feedback. You can subscribe and see more information (including pricing in your local currency) on our website, or via the Account tab (iOS) or settings drawer (Android).

We’re proud to offer a version of Splitwise that users think is worth paying for. We’re extremely grateful to all of the users who asked us to create a paid version, and especially grateful to those who subscribed to Splitwise Pro before it was really even a thing.

Pro is still very much a work in progress, and we plan to continue improving and evolving its features. In particular, we look forward to improving the UI and OCR in our receipt scanning technology, especially outside the US. If you have any feedback, suggestions or complaints, please let us know!

The iPhone redesign was an opportunity to build one of our most commonly requested features: cover photos for groups. (We’ve brought group cover photos to Android as well, so everyone can join in on the fun.)

Splitwise beta testers have had a blast uploading roommate selfies, scenic shots from trips, and memes. Cover photos can be fun and meaningful – you can reminisce about vacations or apartments past – and also practical, making a list of groups more scannable so it’s easier to find the group you’re looking for.

We think this feature makes Splitwise more delightful, and is a good reminder of what we’re all about: our most important relationships.

Splitwise for iOS Version 5 (codenamed “Memorable Elephant”) also includes changes and improvements to nearly every screen in the core app. By rebuilding major portions of our core screens, we were able to improve functionality and accessibility, while making powerful features more discoverable.

We simplified and redesigned the home tabs to make it easier to see all your balances in one place. The custom header on this screen now allows you to persist a filter, so for example you can choose to only view your friends with outstanding balances only. This can be very useful if you have a lot of friends on Splitwise.

Of the many changes to this screen, the biggest discoverability improvement comes from getting rid of the “more” button. We’ve moved many of these powerful features (such as export to CSV) into a horizontally scrolling list of buttons that can be used without opening another menu.

Group totals in particular is a popular feature that is much easier to find in the redesigned iPhone app. Totals functions as a lightweight budgeting tool for knowing how much you’ve spent in a group and how much your group has spent overall (this month, last month, and all time). Splitwise Pro contains even more powerful budgeting and graphing features!

The new expense details screen is majorly improved in terms of layout with many quality-of-life improvements. Budgeters will love the small chart on this screen showing spending-by-category and the quick categorizer button for tagging uncategorized bills. This chart will link to more in-depth reports if you’ve purchased Splitwise Pro. We’ve also added a sticky comments bar for easier expense comments.

We’ve made it much easier to create and manage groups with many members, and to add many friendships at once. In the redesigned version, you can select multiple new group members or friends at once (instead of selecting them one-by-one). You can also invite friends to a group by sending them a link, whether or not they have a Splitwise account already.

The updated group settings screen contains many small layout improvements, as well as the ability to save default splits for Pro users.

We used the new visual language to refresh the add expense screen. While the changes are subtle, we think they’ve had a real impact on discoverability of the category, currency, date, receipt, and note features. We also realigned all the fields to achieve a more uniform interface, which makes it easier for new users to learn how to use the form to enter their costs.

Users with Splitwise Pro will also be able to make use of receipt scanning and itemization, which are powerful new features that we plan to continue improving and refining in the months to come.

We’ve made a few improvements to Recent Activity, including badging notifications with the user avatar of the relevant person. This makes it easier to see at a glance what changed and who changed it.

We’ve renamed the Me tab to Account, which is now denoted by your user avatar in the tab bar. The layout of the buttons and options there is improved, and should be more familiar to iOS users. Head here to upgrade to Splitwise Pro, add a phone number to your account, or change your notification settings.

If you have feedback, praise, complaints, or other thoughts about the new direction, please reach out to hello@splitwise.com or use the Contact Us option in the Account tab to get in touch. We read and respond to every email, generally within 1-2 business days.

To all our users: thank you so much for continuing to support Splitwise. We’re so excited and proud to share this new iOS app with you.